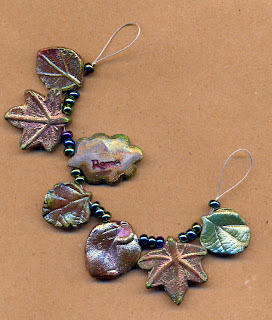 One of the many things I learned about at summer camp (when I was a kid) was raku firing for pottery. Mr. Potter (not his real name - I think it was really John) filled an oil drum with straw, then transferred our freshly-fired clay treasures to the drum where they burned the straw. Anything left unglazed would turn matte gray, and the glazes got this wonderful oil-slick look with all sorts of fall colors. The leaves pictured here are made with this technique by Rama.

There is also such a thing as raku glass in lampworking, which affords similar colors when exposed to a reducing flame (low oxygen). I'm guessing there must be some correlation between the two kinds of raku because of the glass component in ceramic glaze.

I have some raku-glazed Greek ceramic beads; I use them a lot in bangle bracelets because of their large holes that can accomodate the core wire. I also have been hoardering* raku lampwork beads. Because of the way I sort my beads (stones by color, lampwork separate, big-holed beads separate from that), likely combinations like raku ceramic with raku glass aren't as obvious as it would seem. I even made a bangle with both kinds and proceeded to list the components, and a whole day later my left brain has finally kicked in with the correlation. Now stop chuckling and go look at the pretty new raku/raku bangle and ceramic raku brangle (both also available as kits).

*Hoardering: Ordering more of my favorite beads so I don't have to use up the ones I already have.
at 8:31 AM

Anne
Richmond, Virginia, United States
I don't keep scrapbooks, so this is my way of tracking my adventures and keeping my friends, family, and customers in the loop.